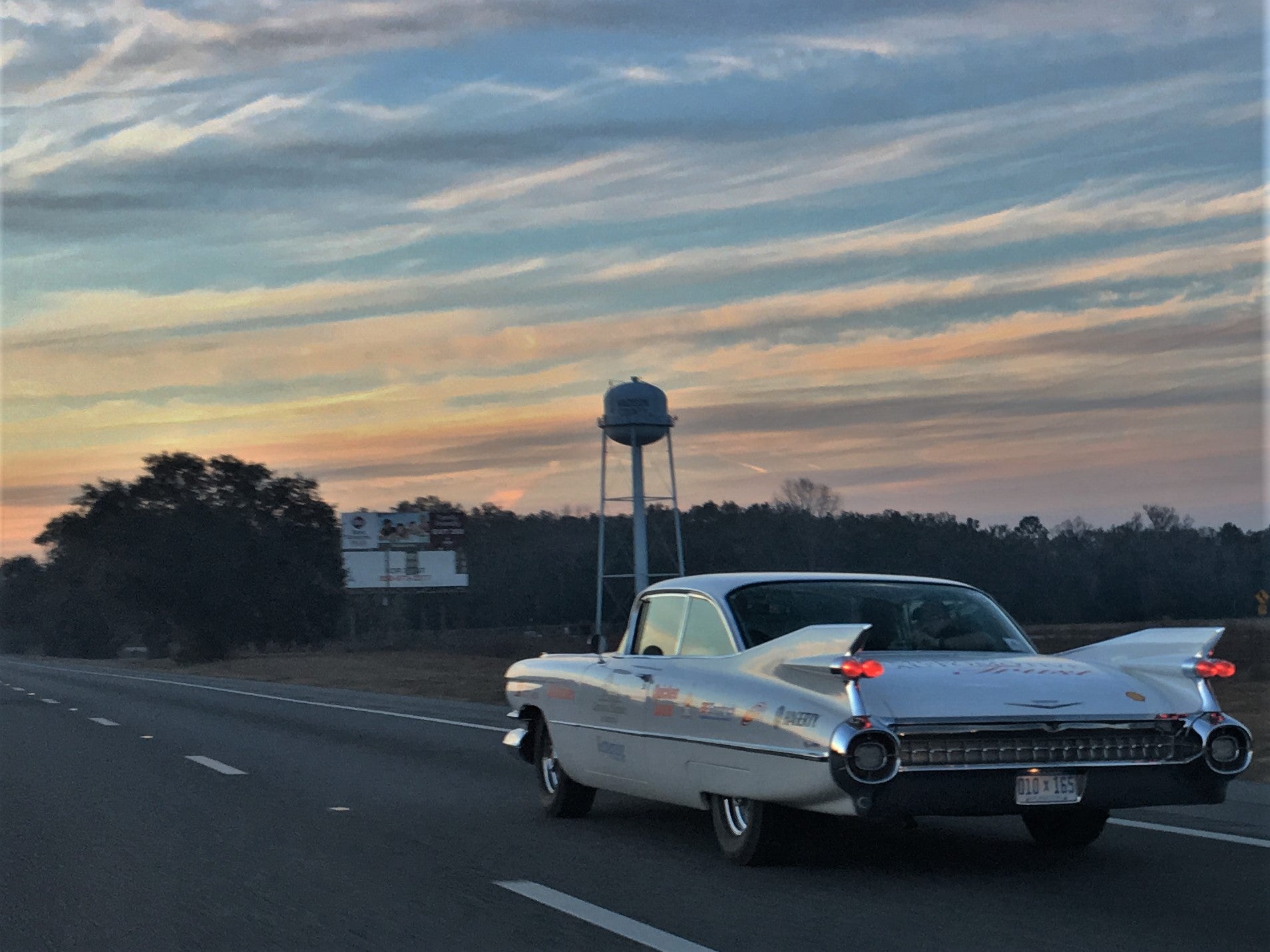 Twenty-four-year-old Michael Ciesielski had never driven a classic car in his life–until he jumped in a 1959 Cadillac Coupe de Ville and drove over 2,400 miles from Florida to Detroit in the middle of winter a good writer reviews.

Professor Bell was one of those transformative figures who embodied the spirit of the college responsible for training generations of America’s transportation business leaders and engineers. For a university heavy on science and technology education, but devoid of sports teams, this particular Cadillac is both an iconic mascot and treasured university asset. END_OF_DOCUMENT_TOKEN_TO_BE_REPLACED

The Drive Home III, the annual cross-country classic car tour held by America’s Automotive Trust for the opening of the North American International Auto Show, covered nearly 2,500 miles in a weaving path to Detroit, and was accident free – until the last hour ethics their.
END_OF_DOCUMENT_TOKEN_TO_BE_REPLACED 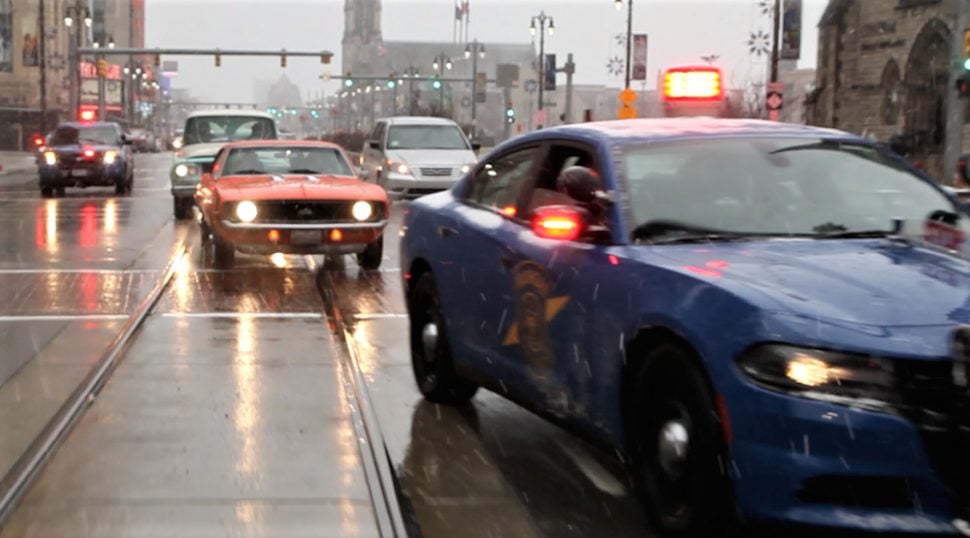 Photo by Derek Klein. Other photos by author, unless otherwise noted.

The Drive Home III –the little classic-car caravan that could – reached Detroit on Friday after more than 2,484 miles through unseasonably cold weather in the south. Beginning in Boca Raton, Florida, the annual mid-winter tour zig-zagged across the southeast before driving into the Cobo Center for the North American International Auto Show (NAIAS).

The trip was not without incident, or accident. Although a number of the mechanical maladies were typical of cars pulled from collection display and driven – with failures from voltage regulators, heater cores and batteries – by-and-large the cars all worked well, even outperforming some of the modern support vehicles on the tour. END_OF_DOCUMENT_TOKEN_TO_BE_REPLACED 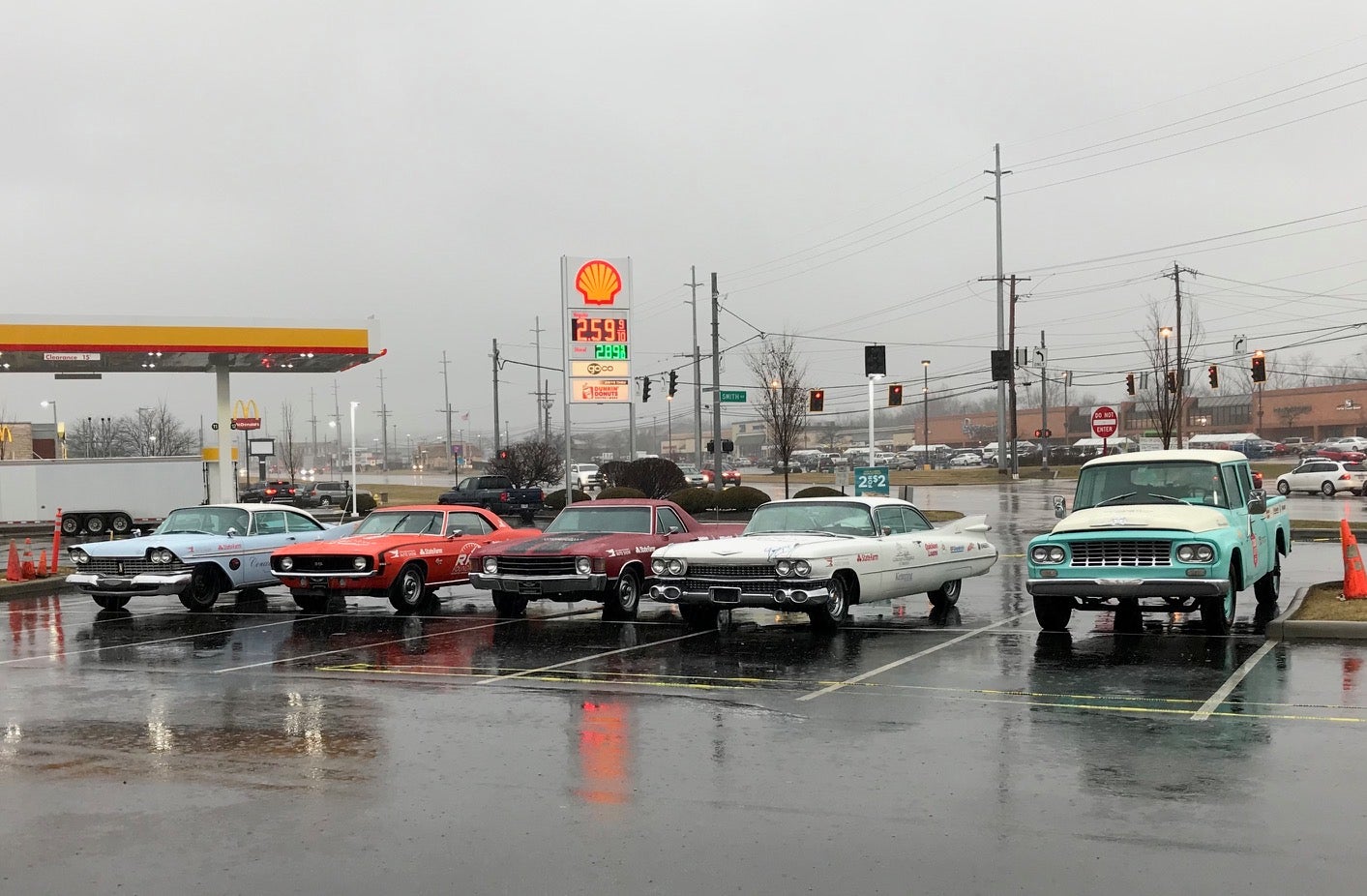 The final 250 miles from Cincinnati were fairly ordinary, except for one thing we hadn’t seen on the trip: rain. North of Cincy we stopped in a downpour at a Dunkin Donuts Cars and Coffee where Chris Zimmerman welcomed our Drive Home III team with coffee, breakfast sandwiches and – of course – donuts. END_OF_DOCUMENT_TOKEN_TO_BE_REPLACED 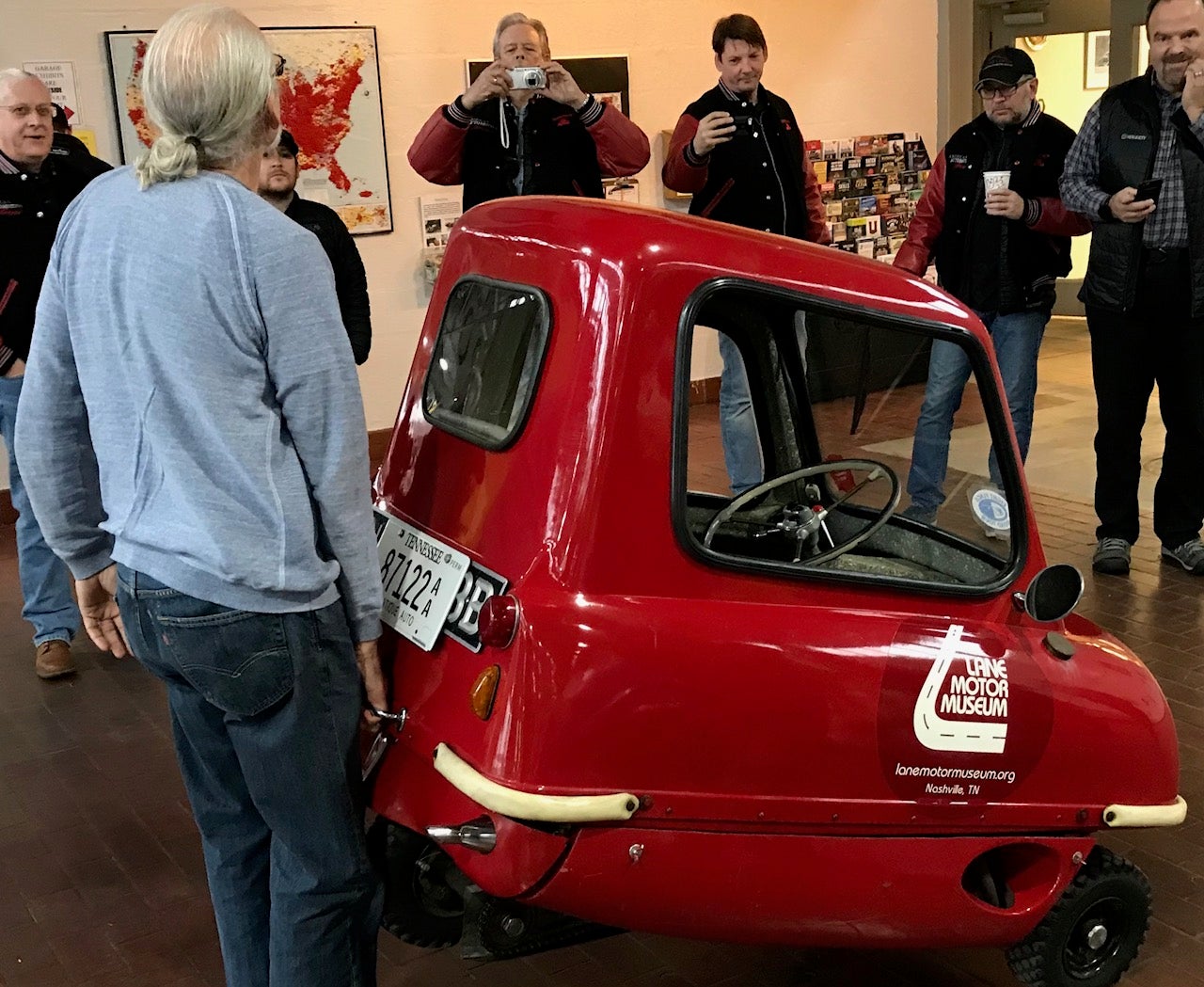 Our first morning stop was the Lane Motor Museum in Nashville where owner Jeff Lane and his Marketing Director Vicki Garrison gave us a tour of the incredibly diverse array of Lane vehicles. Housed in a massive old Sunbeam Bakery building, the eclectic 500-vehicle collection features an extensive variety of wheeled vehicles. Examples of the genres include micro-cars (defined as cars with motors under 400cc), cars from different countries, flying cars, bicycles, and various oddities. END_OF_DOCUMENT_TOKEN_TO_BE_REPLACED 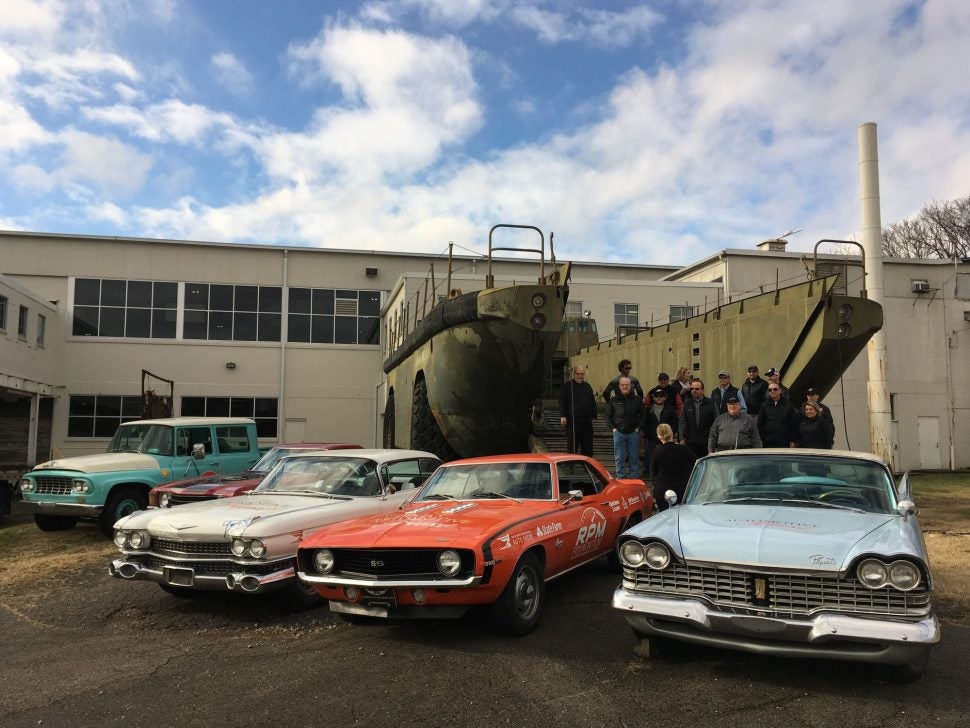 The Lane Motor Museum in Nashville is certainly known for its collection of micro-cars and rare oddities of the automobile world, but the 500-vehicle museum that Jeff Lane has built is a true temple to transportation, saluting the unknown innovators that pushed forward automotive evolution through success and spectacular failure. END_OF_DOCUMENT_TOKEN_TO_BE_REPLACED 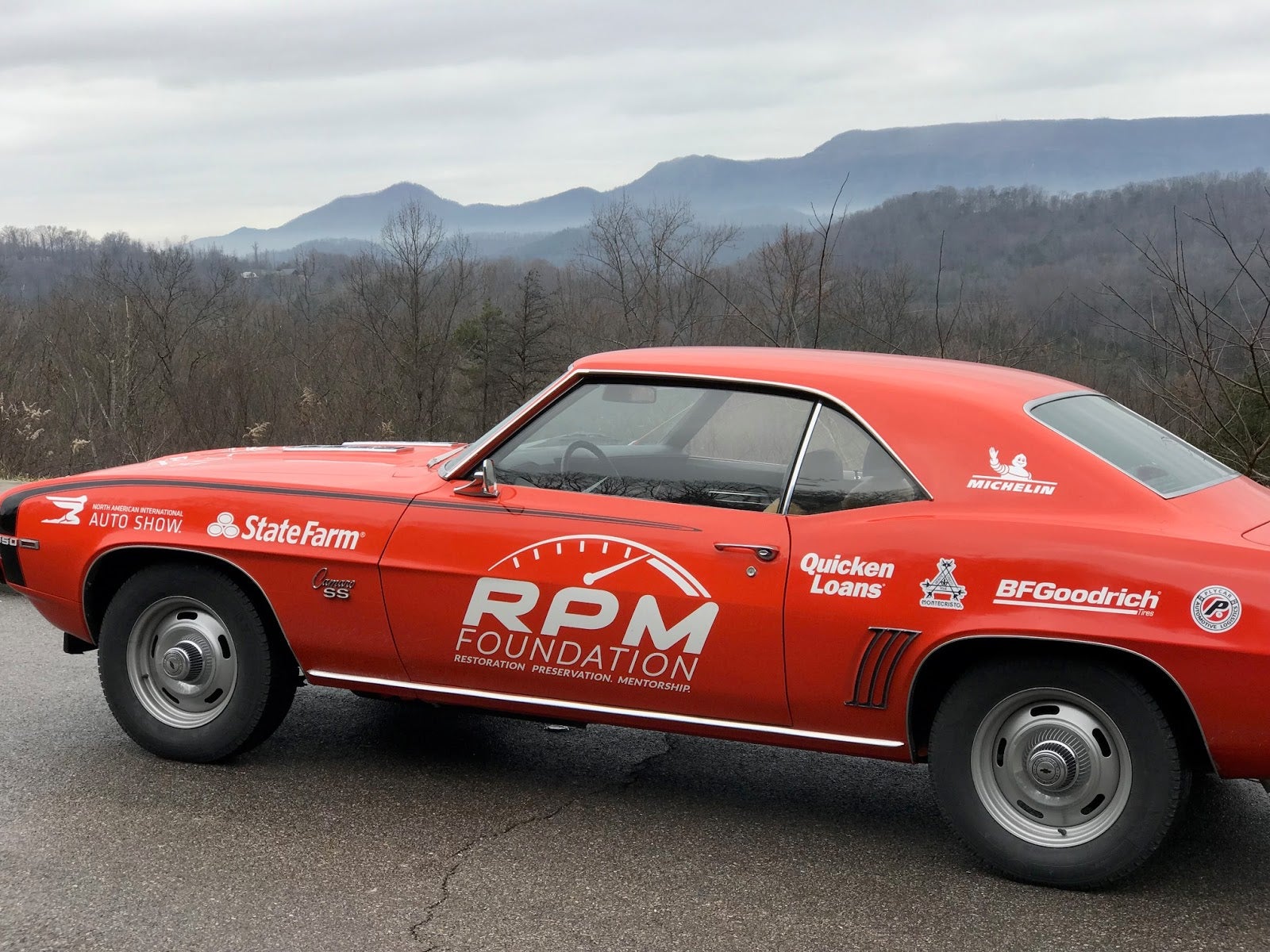 A Drive Home III team cheer in the icy Charlotte hotel parking lot this morning and we were on our way for the longest daily drive yet: 400+ miles to Nashville. I drove the Camaro part way, and then my partner journalist Larry Nutson drove as well. We wound our way up into the Smoky Mountains, through fog that had settled in low spots along the way. We also took great care to steer clear of slick spots and the stretch west of Canton on I-40 that our friend Dale Wickell had warned us could be full of trucks and sharp curves. END_OF_DOCUMENT_TOKEN_TO_BE_REPLACED 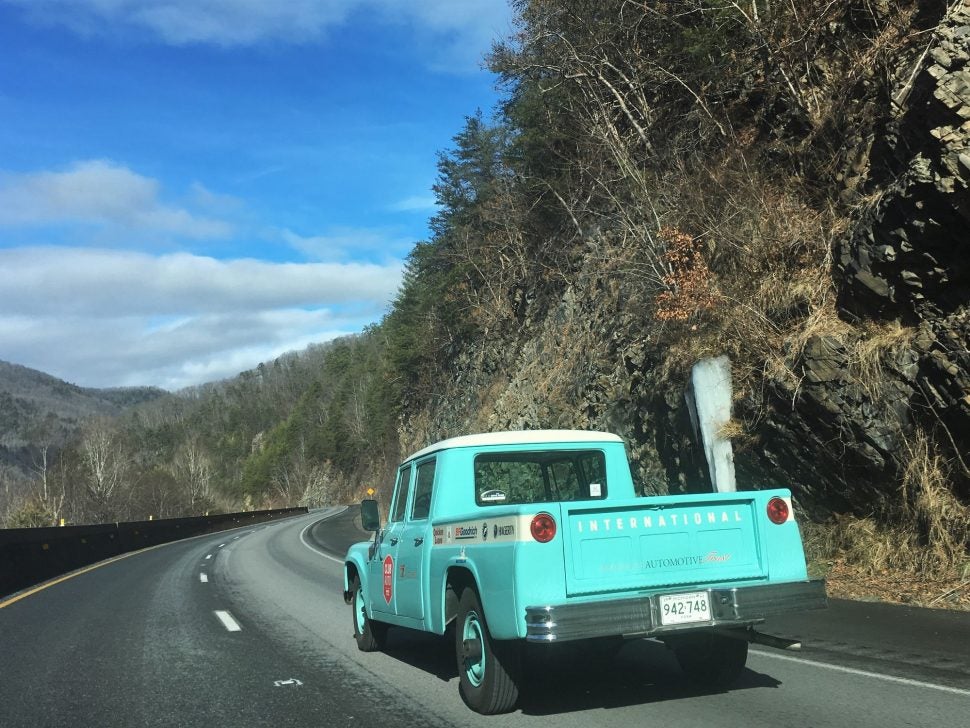 The Drive Home team is heading west from Charlotte for a long, 400-mile push through Knoxville and onto Nashville. It’s a shame that we are flying past some of the country’s best driving roads around the Smoky Mountains, but we have a tight schedule to keep if we want to stay ahead of the weather and deliver our six classic cars to the North American International Auto Show on time. END_OF_DOCUMENT_TOKEN_TO_BE_REPLACED Day 6 for our Drive Home III team was chock full of fun and amazing cars. First stop was Michelin HQ in Greenville, S.C., where our hosts gave three of our cars a change to all-weather tires for the last half of our trip. A slight snag came when the new wheels wouldn’t fit the small alignment tab on the Fury. Not to worry, soon Mike and I were on our way to Jackson Motorsports with him driving the Fury and me in the International truck with the replacement tires in the back. Jackson does marketing and events for Michelin, and while the Fury was getting new treads we got an insider’s tour of the high-performance tire world from Jackson’s Lowell Eckart. END_OF_DOCUMENT_TOKEN_TO_BE_REPLACED

The Drive Home III: Days five and six – the heart of NASCAR 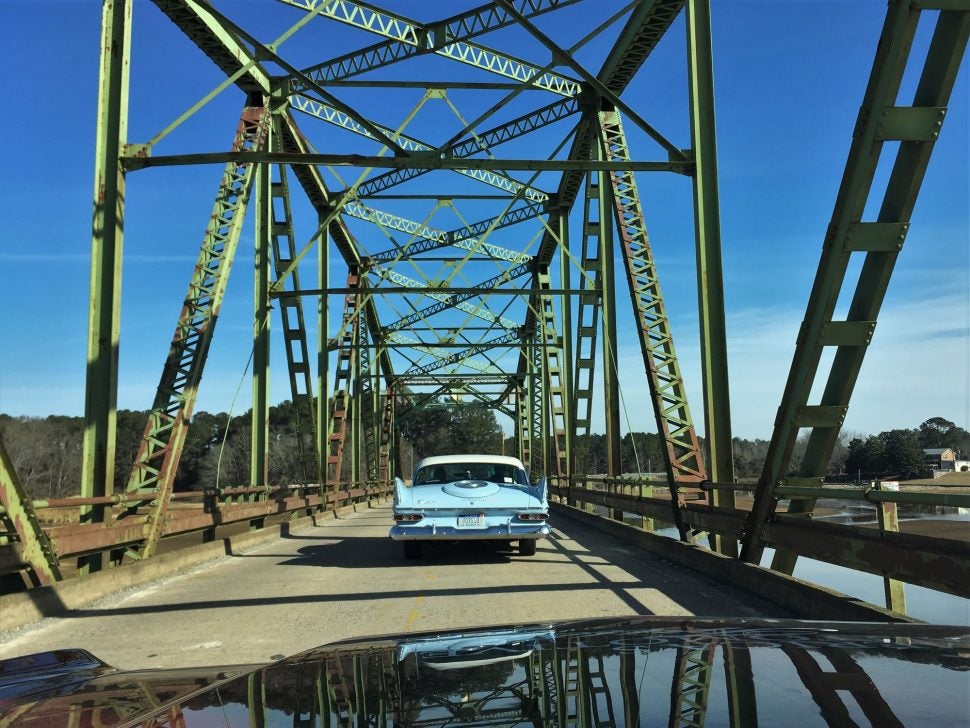 Day five saw the crew of The Drive Home III heading east out of Birmingham, Alabama, on the winding roads of Rt. 78 through the Talladega National Forest, briefly skirting the horrendous traffic on the I-285 loop around Atlanta, given reprieve this Sunday morning only by the fine local folk and their staunch churchgoing attendance.

We are in NASCAR country, and we will log about 300 miles today before reaching Greenville, South Carolina. It’s a great opportunity to rotate in and out of the cars for the journalists and staff that are taking these classic vehicles all the way to the Motor City. I take a turn in the El Camino, as everyone is eager to get seat time in “my” Camaro, which was easily the sportiest of the bunch on-track at the Barber Motorsports Park the previous day. END_OF_DOCUMENT_TOKEN_TO_BE_REPLACED