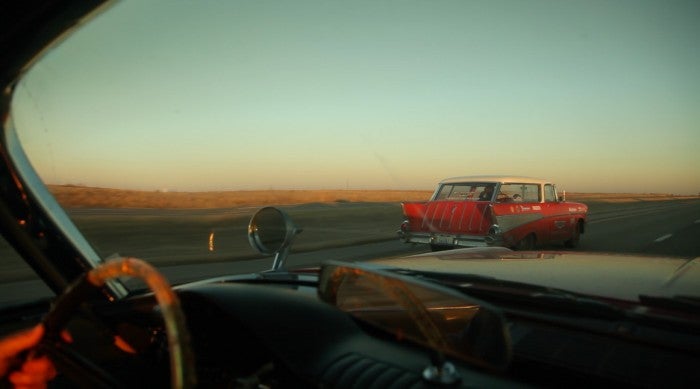 Today we woke to a bitter Kansas breeze needing to scrape our windshields and take extra time to warm the engines. That said our relatively short drive to Kansas City was marked by sunshine and blue skies. The weather gods were with us for I’ve experienced blizzards with high winds on these same roads and those conditions are tough–often deadly. Not today, the cars ran so easily that when we found the best rest stop of the trip thus far–a Shell station with Starbucks!–we dawdled for nearly an hour. We also took about a half hour to explore the dirt roads of a nearby farm community just for fun!

Our good friend and Steering Committee member, Mark McKee, who lives nearby, had organized an enthusiast gathering and Kansas City barbecue for us! The beef, ham and baked beans were ‘out of this world’ and accompanied by great slaw and potato salad. I skipped lunch and didn’t hold back!

Mark organized the gathering of about 40 collectors at the Kansas City Automotive Museum who welcomed us to their facility. Among them were a number of ACM members who support the Hagerty Education Program at ACM. They were thrilled when I introduced a McPherson Colllege student from KC who had received a HEP internship last summer. Jason’s internship was at ACM and he worked on the cars as they were being prepped for this trip. He was excited to see the cars and proud for his part in The Drive Home. Diane Fitzgerald, our National Director of HEP joined us today and will participate with us over the next few days as we pay particular emphasis on HEP in events in KC, St Louis and Chicago. It’s good to have her with us.

The Kansas City Automotive Museum is a modest place compared to ACM –perhaps some 15,000 square feet in total. It has a small but dedicated staff and committed founder whose vision is for the museum to be at the hub of the car club culture in KC. I was impressed with their plans, their goals and their vision and spent a good amount of time with the founder and the director. Some of their staff were quick to inform me they had visited ACM and we’re delighted we had elected to do these gatherings with them –they are helping organize tomorrow’s event too. I emphasized our vision is one of collaboration and shared experience and that we will welcome collaboration where opportunity exists. They share that orientation and welcomed my commitment.

Tonight journalist Henry Payne of The Detroit News joined us and will participate with us at the Cars & Coffee in downtown KC tomorrow, take a turn behind the wheel and join us for the gathering at Hyman Classic Motorcars in St Louis. In spite of the flooding there they say we can get through!

Kansas City has a thriving enthusiast culture and reputation for warm hospitality –a hospitality which we were privileged to receive today due to our good friend Mark and new friends we continue to meet on the road.