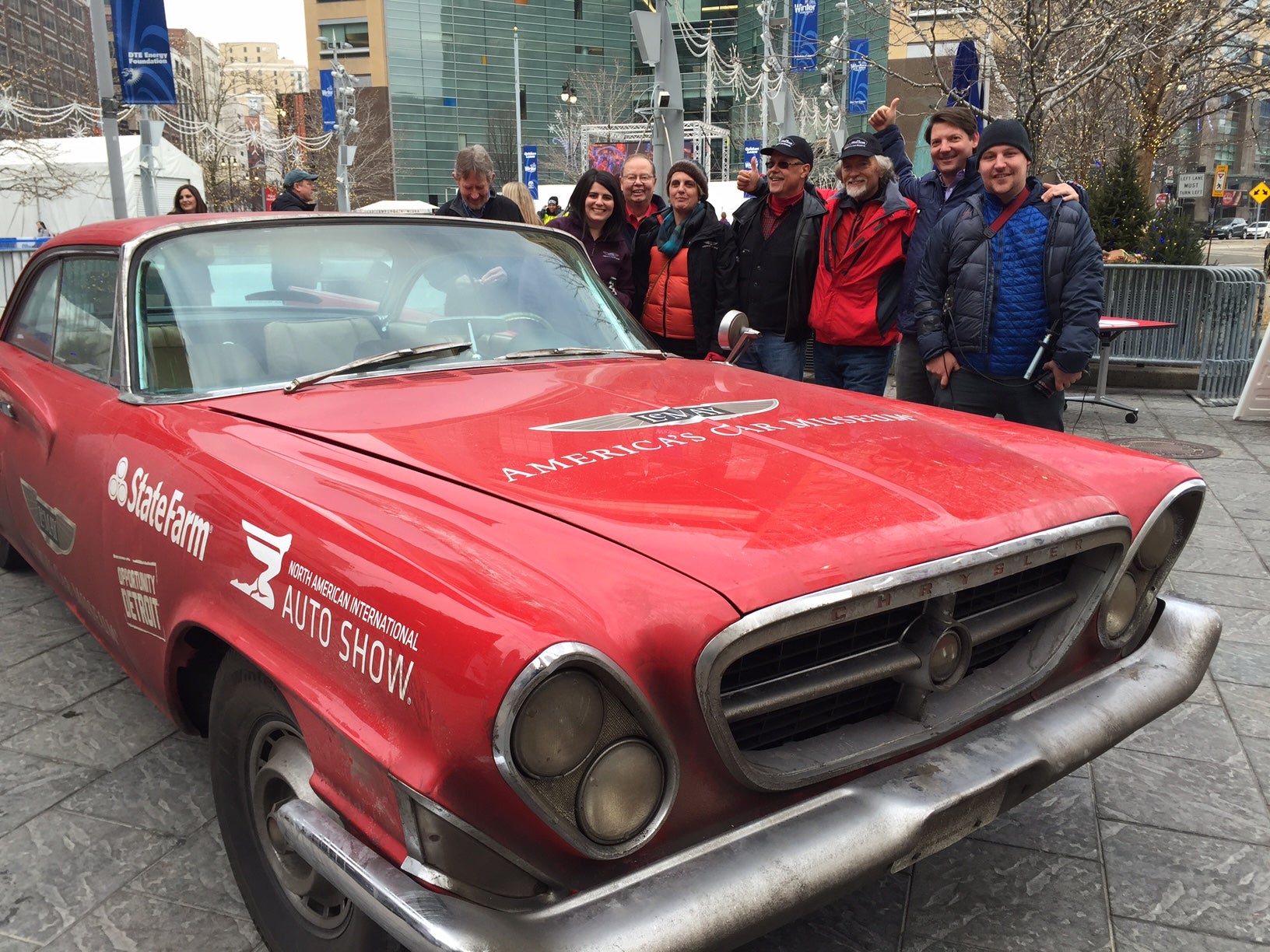 Our friends at the North American International Auto Show, Detroit Auto Dealers Association, and Opportunity Detroit sure provided a terrific “˜homecoming’ for us! And like a traditional college homecoming it was a multiple event and multiple day affairs.

The celebration got underway on Thursday, evening, January 8th, at the beautiful Townsend Hotel where NAIAS and ACM co-hosted a private event to thank our sponsors and to interact with members of the local auto community. The event, attended by some 50 persons, was a time for quiet but animated conversation and for reflection on The Drive Home. The three cars, covered in all their road grime were staged in the hotel ballroom with signage about each car and about The Drive itself and with several screens showing remarkable film footage, shot by our videographer Derek Klein, of our journey across America.

Frankly, it was stunning to watch and relive what we and our “˜Detroit Iron’ had experienced and completed without a mishap of any kind. We’d experienced the diversity of the American landscape, the extremes of weather and road conditions, and enjoyed the hospitality of enthusiasts along the way in small towns and major cities. We’d seen Americans of all ages and economic and social groups and car enthusiasts respond emotionally to the cars and thanked us for bringing them to us. It affirmed to me that preserving America’s automotive heritage is an important purpose and that the Museum should be proud to be at the center of the movement to do that.

That evening, Paul Sabatini, Chair of the Detroit Auto Dealers Association and proprietor of Lincoln of Troy graciously helped us place the cars inside his dealership so that they would be out of the icy winter’s grip when we would begin the final drive””some 35 miles or so””from the dealership down historic Woodward Avenue into The Motor City.

When we arrived at 7:30 Friday morning for an 8 a.m. “˜cars and coffee’ hosted by Paul for media and enthusiasts we were stunned that large numbers of them were already waiting for us. Some 40 collector cars had been driven to the scene to join us in creating a winter “˜Woodward Dream Cruise’ to the city. And with them were journalists, radio and TV crews from nearly every media outlet in the region. Many of the ACM team members were interviewed by numerous media as were Rod Alberts and Paul Sabatini for the Auto Show.

At our 9 a.m. departure, a CBS Detroit film crew rode with Rod in the Chrysler, another crew rode with Lisa Dancsok of Opportunity Detroit and Rock Ventures as she drove the Nomad, and The Robb Report crew rode with me in the Mustang. Hordes of journalists followed in other vehicles and would pass and re-pass us hanging out of open doors and shooting video of the cars on the drive into the city. The coverage that day and night on every TV station in the area was extensive and positive. Video was sent to outlets in New York and Germany. USA TODAY and other major outlets covered The Drive enthusiastically.

The departure had started with a briefing by the Michigan State Patrol which had sent two cars to escort us into the city so we could travel safely as a group and we were pleased to see the big, blue cruisers with flashing lights leading the way and protecting our rear. One trooper even let our filmmaker, Derek Klein, put a Go-Pro camera on the roof of his patrol car!

We arrived at Cadillac Square where a massive tent had been erected by Opportunity Detroit and where ice sculptures of our cars stood to greet us. Along the way motorists had waved and honked at us and pedestrians called out in greeting. The press gathered for a brief press conference and we had done it. The cars were home!!

Later that day we moved the Nomad, the 300 and the Mustang into the tent which would host the evening’s party for some 350 persons. Opportunity Detroit had transformed the tent into a 50s diner complete with waitresses on roller skates, cheese dogs, sliders, milkshakes and soda fountain. Music of the era had everyone in good spirits and dancing -and the bar helped with that too! It was a great night of celebration of “˜America’s love affair’ with the car and a fitting end to the journey.

On Saturday morning we moved the 3 cars into Cobo Hall where the North American International Auto Show is held each January. Light poured in windows with views of the river and Canada across the way. Facilities were modern, fresh and classy. This was a place worthy of America’s most pre-eminent auto show. And what a show it is””with over $200,000,000 in exhibitions!

Saturday night The Robb Report held its annual Galleria event in cooperation with the NAIAS at the MGM Casino. Fantastic food and drink greeted the 500 well-groomed men and fashionable women who had come for the unveiling of some 30 “˜exotic’ and “˜super’ cars. The cars were amazing to experience!

Our crew had a parting drink and group hug at the close of the Robb Report party and a toast with Rod, Paul and Lisa as well. All of us  reveling in the success that our efforts””and the efforts of so many others””had wrought.

The media remained enthusiastic about our journey as well and Monday I had the opportunity to interview with a number of them including Car and Driver and a live broadcast on The Robb Report TV. As the sun began to set on the day and on The Drive Home, I sat alone for virtually the first time in 2 ½ weeks I could bask in, I could enjoy, what we had all accomplished together to promote the Museum, the NAIAS, the resurgence of Detroit and “˜America’s love affair with the automobile’. We should all be proud and satisfied.