An Insider’s Guide to the Vintage Motorcycle Festival: The MEET at ACM 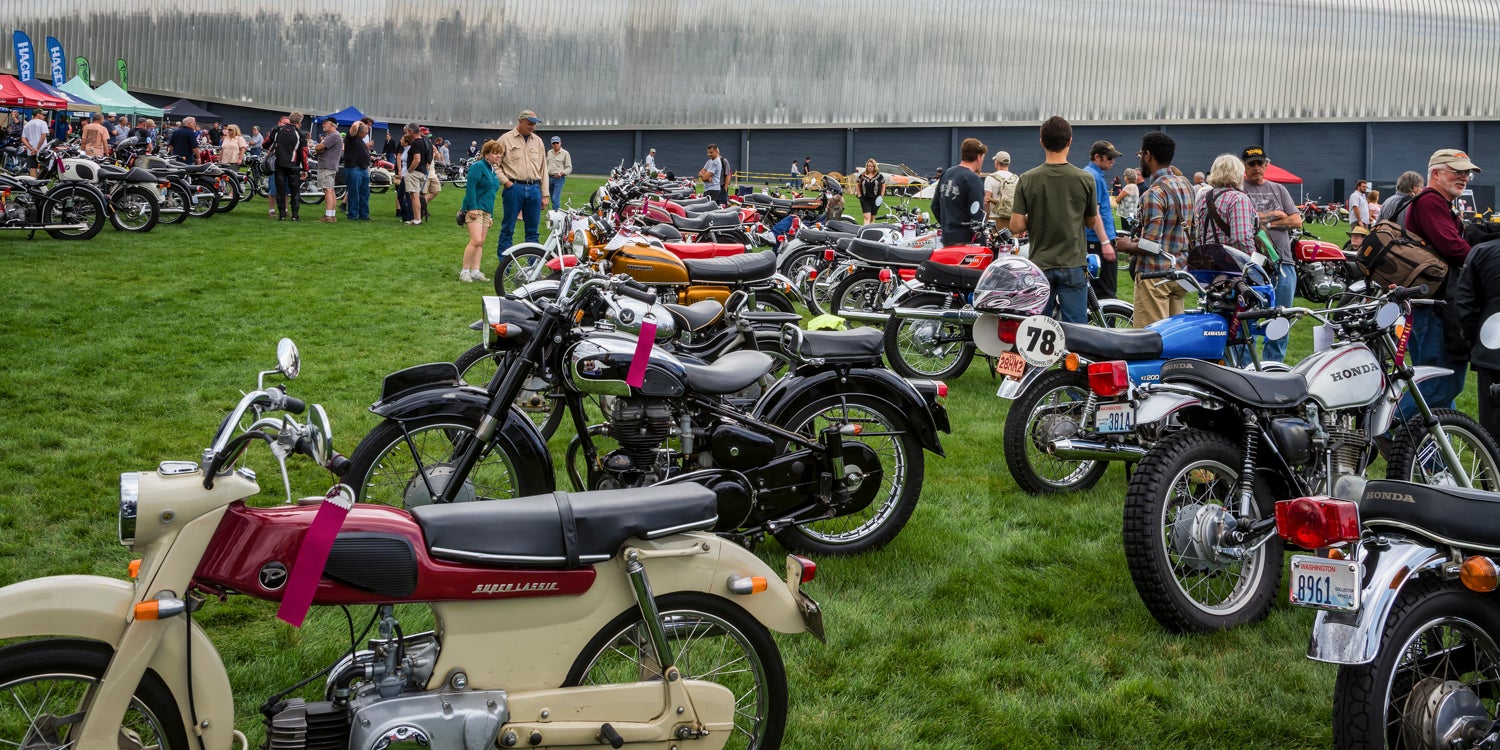 Don’t be misled by the “Car” in America’s Car Museum. The guiding spirit behind ACM is one of inclusion rather than exclusion. And that includes all vehicular transport whether they sport two, three or four contact patches. And if a powered unicycle ever shows up, it’ll get waved in as well. In other words, it doesn’t matter if the object of your passion is a car, truck, trike, motorcycle or scooter”¦ consider yourself more than welcome at America’s Car Museum.

Recently voted the best museum in Western Washington by KING5’s Evening Magazine viewers, ACM celebrates motorcycles and scooters the same way it treats cars. Everything gets its due respect from brass era classics to muscle cars, café racers to baggers, Vespas to Morgan three wheelers. They’re all “sweet rides” in the eyes America’s Car Museum. As a concrete demonstration of its commitment to two-wheels, the Museum hosts an annual Vintage Motorcycle Festival: The MEET at ACM. 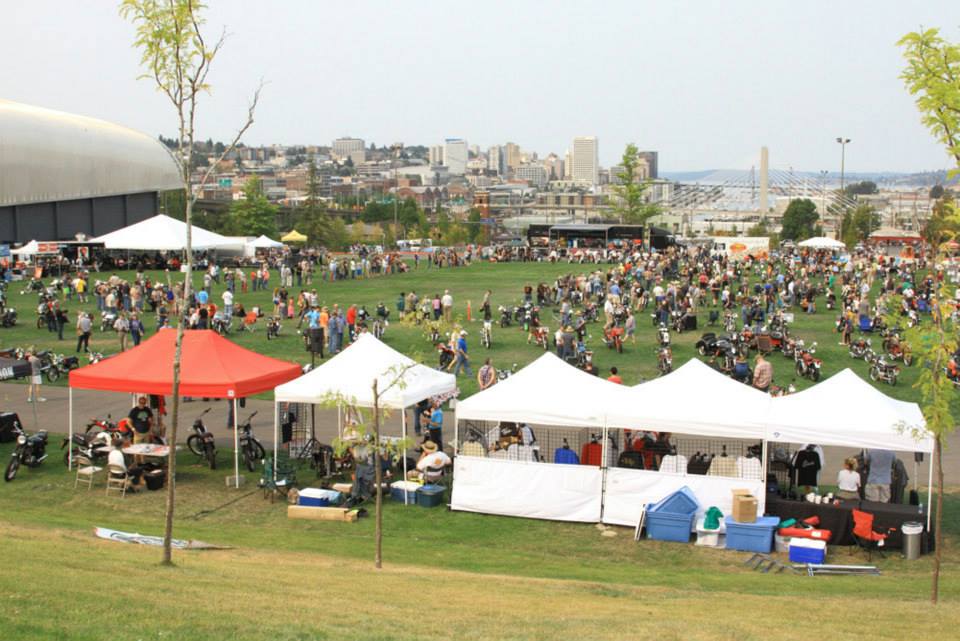 Every summer for the past four years the grass of the Haub Family Field on the ACM campus in Tacoma, Washington, has seen assembled a veritable living catalog of the world’s most beautiful, brutal, rare and exquisitely engineered motorcycles. The makes and models on display represent a cross-section of the best and most legendary bikes to have ever touched tire to track””or road, rock and dirt. One need only scan down the list of judged categories to gain an appreciation of the scope of the event. They include, among others, Classic Powered Bike/Scooter, Custom Bobber/Chopper, Vintage Competition, Best Café Racer, Pre & Post 1974 Motocross as well as individual makes of Japanese, Italian, German, English and American origin.

If, like me, your taste and rides have run to 60s and 70s vintage Japanese dual sports and dirt bikes (I loved but could never afford the Brits), you’ll wax nostalgic at what you’ll see. The mere sight of the sun reflecting off the polished “˜cheese grater’ exhaust pipe shield on a Honda CL Scrambler last summer stopped me in my tracks. I owned three of varying CCs during my high school and college years. I came across other “I had one of those once” bikes”¦ a Yamaha DT250 Enduro and Honda Elsinore complete with optional mud. 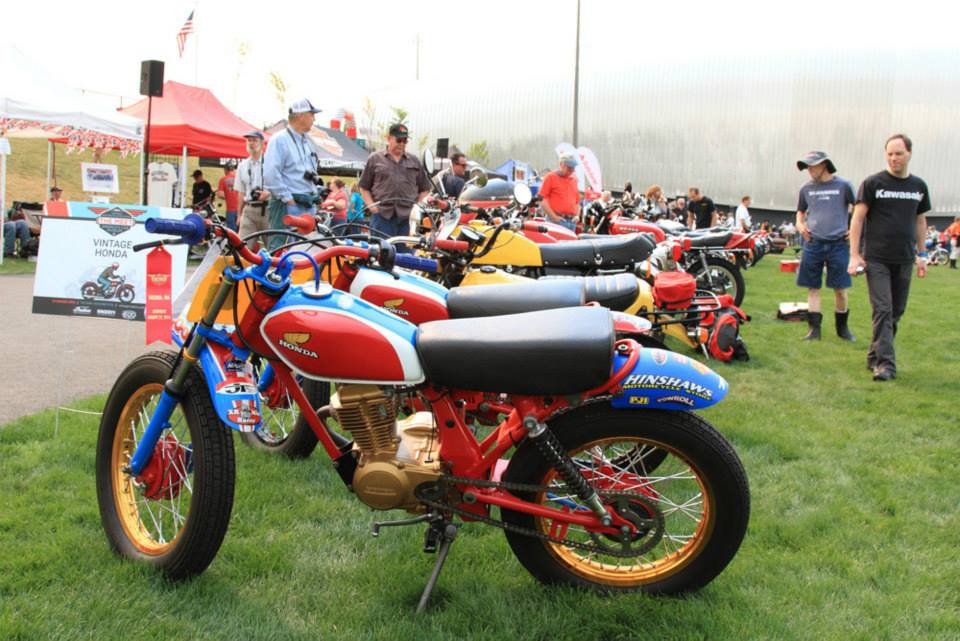 I saw lots of other people that day beginning sentences with those same six words while pointing at Harleys, Indians, Nortons, Ducatis and the occasional Velocette Thruxton and Hodaka Super Rat. By the way, that cheese grater I mentioned was attached to ACM CEO and avid motorcycle enthusiast David Madeira’s Honda CL. Unlike I experienced, he gets to park it next to his Norton Commando. It’s not surprising why bikes are held in such high esteem at ACM when the CEO rides along on two as well as four wheels.

True to the term “Festival,” The MEET at ACM is an all ages family-friendly affair. In addition to the approximately 400 bikes and scooters on view, visitors will also enjoy demonstration rides, vendor booths, free seminars and a thrilling show put on by the famous Seattle Cossacks Motorcycle Stunt and Drill Team. It all takes place on Saturday, July 30 on the campus of America’s Car Museum. And if you ride, don’t miss the Sunday Ride through the Mt. Rainier Valley followed by lunch on the Haub Family Field. For more information visit www.vintagemotorcyclefestival.com.

See you this weekend at the fifth annual Vintage Motorcycle Festival: The MEET at ACM.
Until then, “ride on!”