The Wailers have been credited for lighting up the 60’s rock explosion in the Pacific Northwest. Their rock arrangement of “Louis-Louis” propelled “The Kingsmen” into the spotlight, and Tacoma rock sensations “The Sonics” were produced and signed to the Wailers’ own label, Etiquette Records. 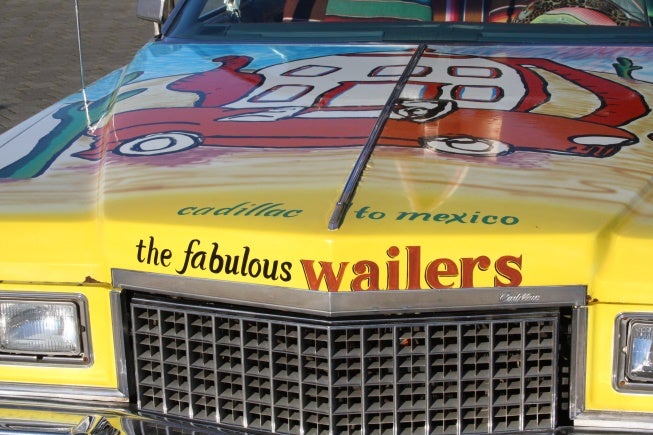 The musicians in the band have varied over the years. Founding band member Kent Morrill played keyboard and sang lead vocals with The Wailers for their entire history. Buck Ormsby joined immediately after “Tall Cool One” debuted to play bass and guitar. Guitar players over the years have also included Rich Dangel, John Greek, Neil Anderson and Denny Weaver. The band’s original drummer was Mike Burk, who was later replaced by Dave Roland. Mark Marush played tenor sax initially, but Ron Gardner later took over and also sang lead.

In 2010, The Fabulous Wailers generously donated their beloved  Wailermobile to ACM. 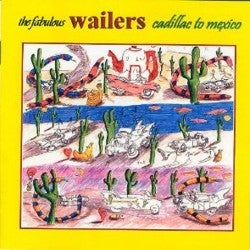 Featuring artwork by Tacoma Artist Teddy Haggerty to promote the “Cadillac to Mexico” album, this 1976 Cadillac Brougham was used on the West Coast tour following the album’s release in 2001.

The car is equipped with a public address system, mounted to the roof, and accompanied by the sign that advertised the groups’ annual “LouieFest” music festival, well-known for featuring a huge cavalcade of talent that presents the very best in Northwest music.

Ormsby added that “we used to ride around in this car, playing songs like Louie Louie, just blasting them out from the P.A., and announcing to the people, telling them to come to that night’s show! That is, until we found out about some very strict ‘noise abatement’ laws within the city of Tacoma”. There it is, folks…illegal activity, Wailers style!

When the band split up in 1969, Kent Morrill was the only remaining founding member. Members of The Wailers would continue to get together for reunion shows for years after. Morrill passed away in 2011. In 2016, Buck Ormsby passed away on his 75th birthday in where else – Mexico.

See this car in person! The Fabulous Wailermobile will be on display in the ACM Lobby during Drive The Blues Away – a night of live music, gourmet light bites and tastings from distilleries, wineries and breweries on April 21. Click here for details on how you can join us.