The big day has finally arrived: time to be introduced to the crowd by Corky Coker and take the green flag waved by ‘Big Daddy’ Don Garlits. Jacksonville turned out a great crowd to see us off: we were on display in starting order for about 2 hours. The start includes a color guard, the Star Spangled Banner, a prayer for safety, then each car is flagged off individually.

In just a few blocks from the starting gate, the crowd along the route thins out and it’s time to go to work. First we have to drive to the actual timed leg start, which includes the speedometer calibration and in this case, lunch on our own. The weather was hot and very humid but the skies were clear and the winds calm. Once again the roads were long and straight, and we covered a lot of territory at 50 mph, the race’s maximum speed. Leg one was 2 hours, 21 minutes and 20 seconds long: our error was 2 seconds late. If the speedometer correction was off just a tick, the error would have accrued.

Often the first day is shorter because of the opening ceremonies, but we still had 6 legs, or timed sections, to complete. Our score was very good today: :02, :01, ACE (zero error), :02, :01 and :01. Those are awesome scores and we were very happy with a 6.9 second day. In races past that could have won the day.

However, in The Great Race it’s not only what you do, but how everybody else does. And the top 20 teams turned in really strong scored indeed: the overall winner had a :02 second *day, and tied with another car at :02. The tie went to the older car. After almost 6 hours of rallying, the top 10 cars were all in low single digits.

Our very good score was only good enough for 16th overall. To be fair the course was pretty easy today, and it figured that there would be a lot of good scores. There are also 8 more days and the course *will* get harder.

We lost some cars today. Friends of ours from California run a ’28 Ford Sedan Delivery, a very rare car indeed. It’s well prepared and has been in several rallies. Well, they cracked a block, *externally.* They lost water, it started to steam, and they could see the water coming out the side of the block: no oil was mixed in the water. So they depressurized the radiator, added some stop-leak, and made it in. But that was it: it’s on the trailer now, and headed home from Georgia to California. It’s an old car, and anything can happen at anytime. You know that going in, yet it’s still emotionally very tough to have to drop out. There is also an E type Jaguar getting its differential replaced in the parking lot at our hotel tonight (and the mosquitoes here are ferocious). They finished about 1 am and made it to the start. 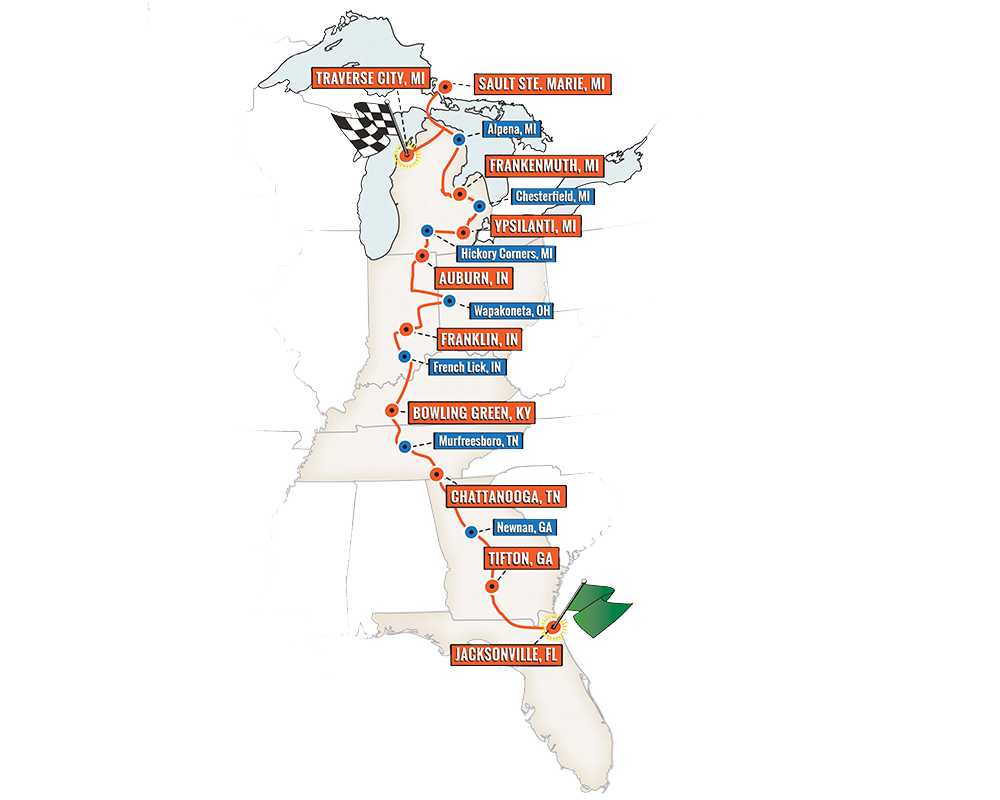 It was a good day for Team America’s Car Museum. The car is strong, our scores are really good and it’s been fun meeting with spectators. We start early tomorrow, it’s midnight now, so it’s time to get to bed and prepare for another day of competition.