By Steve Hedke, who will be representing LeMay – America’s Car Museum with his wife Janet and their daughter Allison in the Great Race

In the summer of 1999 we saw that Great Race was going to finish in Anaheim, which was not far from us. We decided to go down to watch the cars come in, not knowing what to expect or exactly when to be there. We got there a bit early, and found a large crowd already gathering along the street near the official finish gate. I remember it as a warm day and the concessionaires were doing a brisk business in drinks and food.

The energy and excitement were building; event founder and host Tom McRae was entertaining the crowd, then the color guard came in and the National Anthem was sung. Suddenly the thunder of ancient engines could be heard from around the corner and the cars started crossing the finish line. It’s more than symbolic: you can’t win if you don’t finish, and the cars had to cross that line for their scores to count.

Each team was introduced, including their names, hometown, and the car they were driving. The teams looked exhausted but happy: the Great Race motto “˜To Finish Is To Win’ seemed perfectly appropriate judging by the weary grins on their faces. Car after car came in, an amazing and colorful variety of all makes and models, from all over the country and around the world. We had purchased a yearbook which also gave the info on the cars and owners, plus the info on how the race is run. A growing crowd of several hundred people stood curbside enthusiastically cheering each team in.

Suddenly, there was a gap; race cars were caught in city traffic trying to get to the finish, which can be a real challenge. Tom McRae was filling up the time, and mentioned that for 2000 they were considering opening up the field to pre ’61 sports cars. Janet and I looked at each other: up until then the race was restricted to pre ’49 cars and trucks. We were planning an old car to run the race in at some point, but we did have a 1957 Triumph TR3 at home! We let out a whoop, and Tom came over to us, microphone in hand: “˜What kind of car ya’ got?” “˜A 1957 Triumph, and we can beat these Fords with it!’ “OK, go over there and we’ll get you signed up”.

And that’s exactly what we did. Our first rally was a 3 day regional in Palm Springs that fall, and in 2000 we entered the Boston to Sacramento race, where we finished first in the Rookie class. Along with a trophy and prize money, an entry was included for the next year’s race. And we’ve been doing it ever since.

If you are any kind of car enthusiasts please don’t miss the excitement of the official Finish Line! The competition is very tight, with teams finishing within seconds of each other after 9 days and over a thousand miles of rallying. Sometimes the cars are just barely hanging in there, and the teams are tired but must still perform at their best. The top 3 teams are pulled out of line and must wait at the finish line together to find out who won the $50,000 check and the huge “Eagle” trophy we call the “˜big bird’. The victory celebration is amazing, complete with confetti cannons! 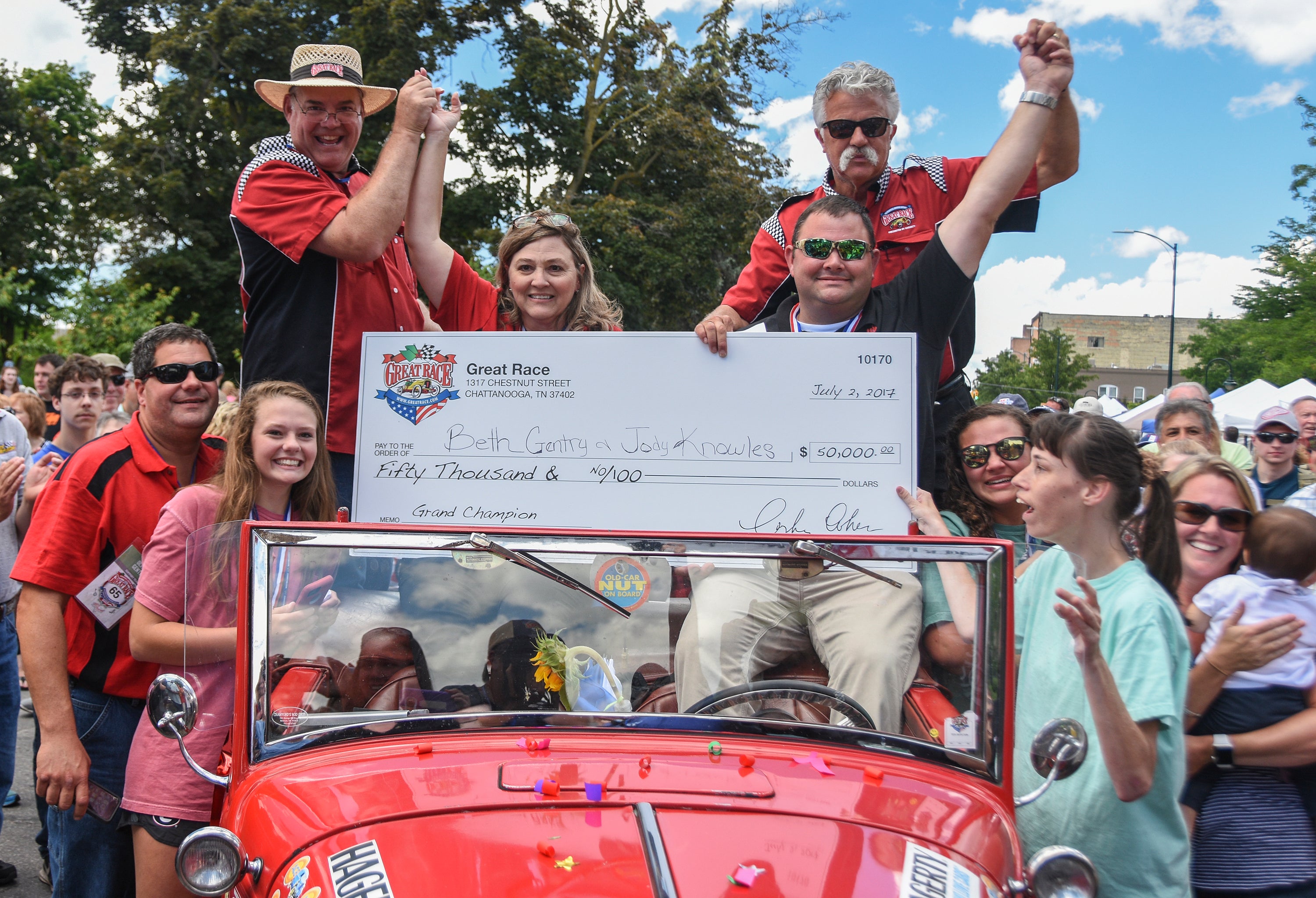 After that the cars will be on display on the Haub Family Field at the LeMay – America’s Car Museum, and you can meet the teams, photograph the cars, and even get autographs in your yearbook. The racers love to talk about their cars and explain how the event works. Who knows, you might even get hooked like we did!