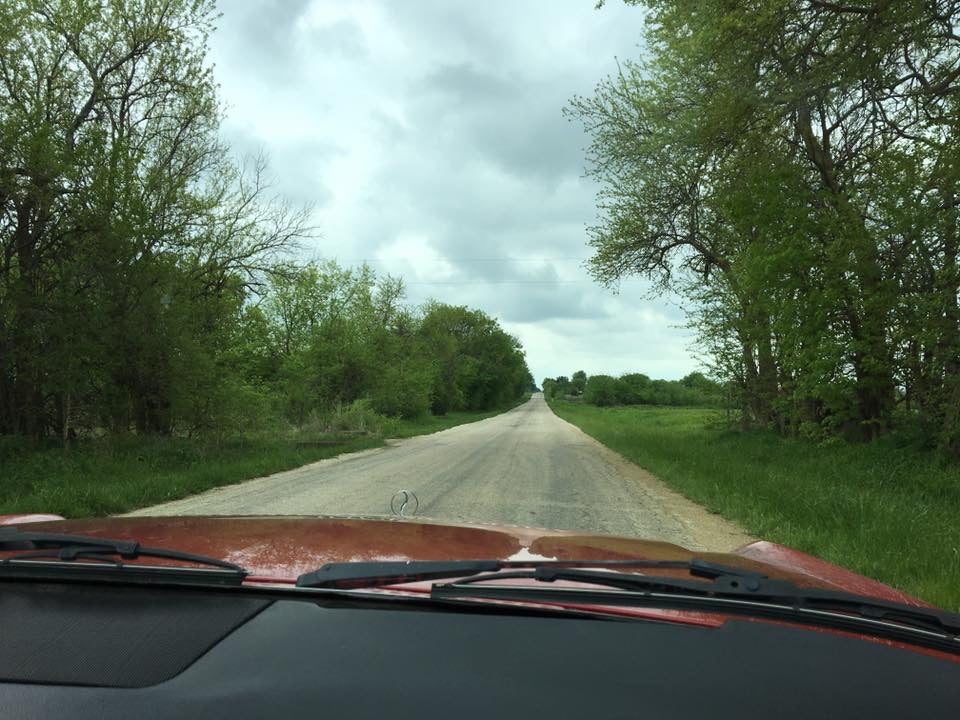 [PHOTO] This is a typical rally road during a timed leg: it is paved, but rural enough not to encounter a lot of traffic while you’re holding exactly 40 mph, or whatever the assigned speed is. We will both be looking for the next maneuver, which might be a ‘hard right 25’ sign to go down to 20 MPH: if so, it will be a while before we see it. The navigator can enjoy the scenery while the driver sees nothing but the speedometer.

Picking up where we left off, we brought our 1964 Studebaker Daytona hardtop home from the VCRA rally in Joplin Missouri with stuff wrong with it. After two Great Race events and thousands of miles of driving we’ve only experienced minor issues. But it is an old car, and stuff happens, especially when pushing it hard. That’s why you tow it there and back.

The first problem was a hard one to chase down. The car started to plow around corners, causing uneven wear on the front tires and a chattering in the steering wheel. Having checked all the suspension components, we found a lower A arm bolt that was loose. We tightened that in the field between rainstorms, hoping it would solve it. The next day’s rally was in wet conditions, and when I hit the brakes we did a 180! Fortunately we didn’t hit anything or anyone, so we gingerly completed the loop and rallied on. The next time we hit the brakes we snuck up on it, and it was squirrely but under control. The rally ended soon after due to flooded roads, and we were happy to cut it short and head home. 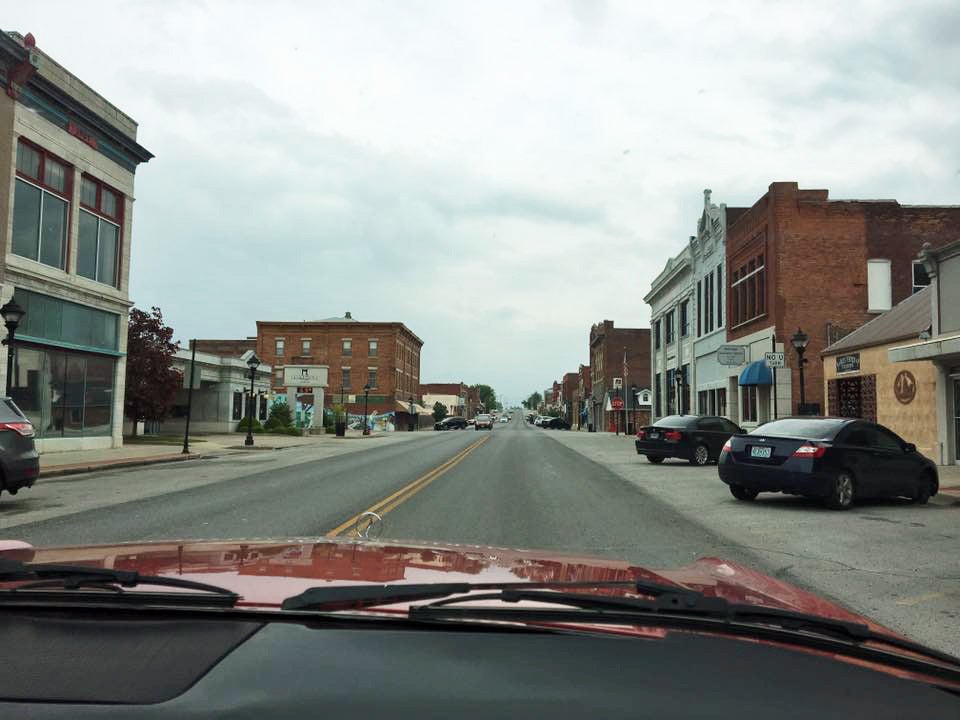 [PHOTO] Great Race and VCRA take us off the interstates and into the heart of the country. This little town was typical of those on old Route 66 in Missouri. We are coming to a stop sign: if the town has a lot of traffic we are usually on a ‘transit’ that gives us enough time to get through traffic lights. But if it’s quiet, like here, and just stop signs, we are still ‘on the clock’ with 15 seconds allotted for each stop sign less the time it takes to stop and accelerate back to speed, which is probably 25 mph.

The VCRA rally is timed so that teams have a chance to practice and fix things before the “˜big’ race. The last thing you want is to break down and wait for the sweep truck, watching everyone else go by. It’s happened to us before: we broke an axle shaft in our ’29 Ford pulling away from a stop sign. The Studebaker is fitted with a Ford 9″ differential so that we can run stronger axles. It also has Tru-Trac, a positraction system similar to what was offered by Studebaker when the car was new. It’s great for rural corners filled with sand and gravel. But on last year’s race I heard a rattling sound, sort of like shims, that stopped and never made the sound again. Trying to diagnose the plowing and front tire wear, it became evident that something other than the steering or suspension was causing it. Going on line and looking at Ford posts, it seems as though we have a shim/clutch pack that is not allowing for the rear wheels to turn independently. So not a huge deal now that we know what it is: simply remove the third member, take it to a rearend shop, and get it rebuilt. 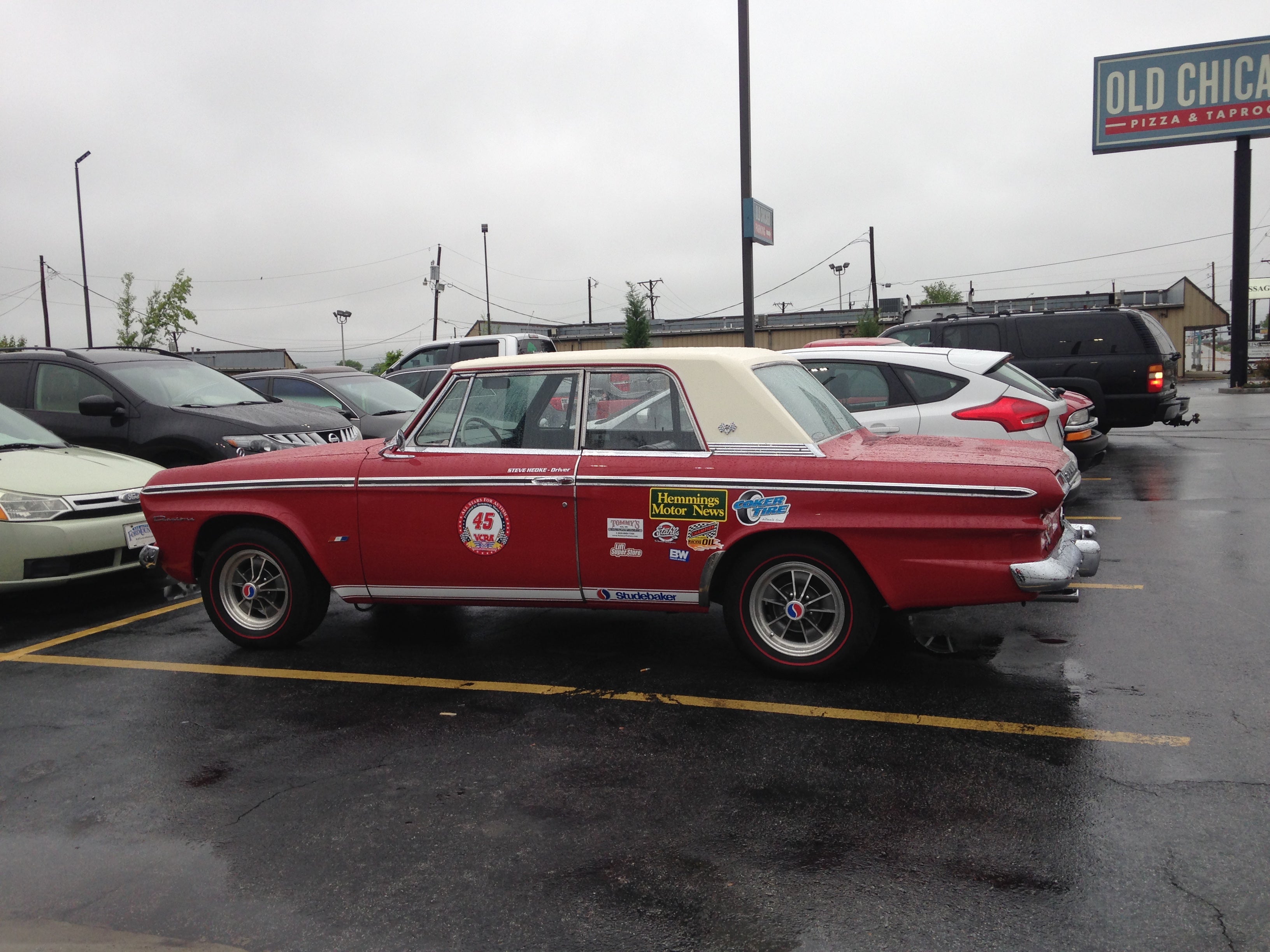 [PHOTO] Rain! Thunderstorms! Floods! No rallying today. We’ve seen nice spring weather in Joplin before, and we’ve been there when it was snowing. Light rain doesn’t deter us, but you can’t have checkpoint crews standing by the roads in lightening. And sudden detours around flooded rural roads can pop up any time. In this shot you can see the mandatory sponsor decals: the LeMay decal is on the hood. Other racers commented favorably about having LeMay-America’s Car Museum on our car: it has a lot of respect in the collector car hobby.

While the car was sitting at home I noticed coolant leaking out of the right door. The heater valve, probably original to the car, was leaking. It’s positioned right over the passenger’s foot. I remember now how “˜60’s cars used to do that! The part can be rebuilt, and it is also available brand new, but the control works in the opposite direction. They are priced the same. So I’ll fit the new one, send the old one out for rebuilding, and replace it after the Great Race. Parts availability for the Studebaker is really quite good.

Annoying things like a leaky output seal on the transmission and a leaking axle seal are easily dealt with while the driveshaft is out for the differential repair. 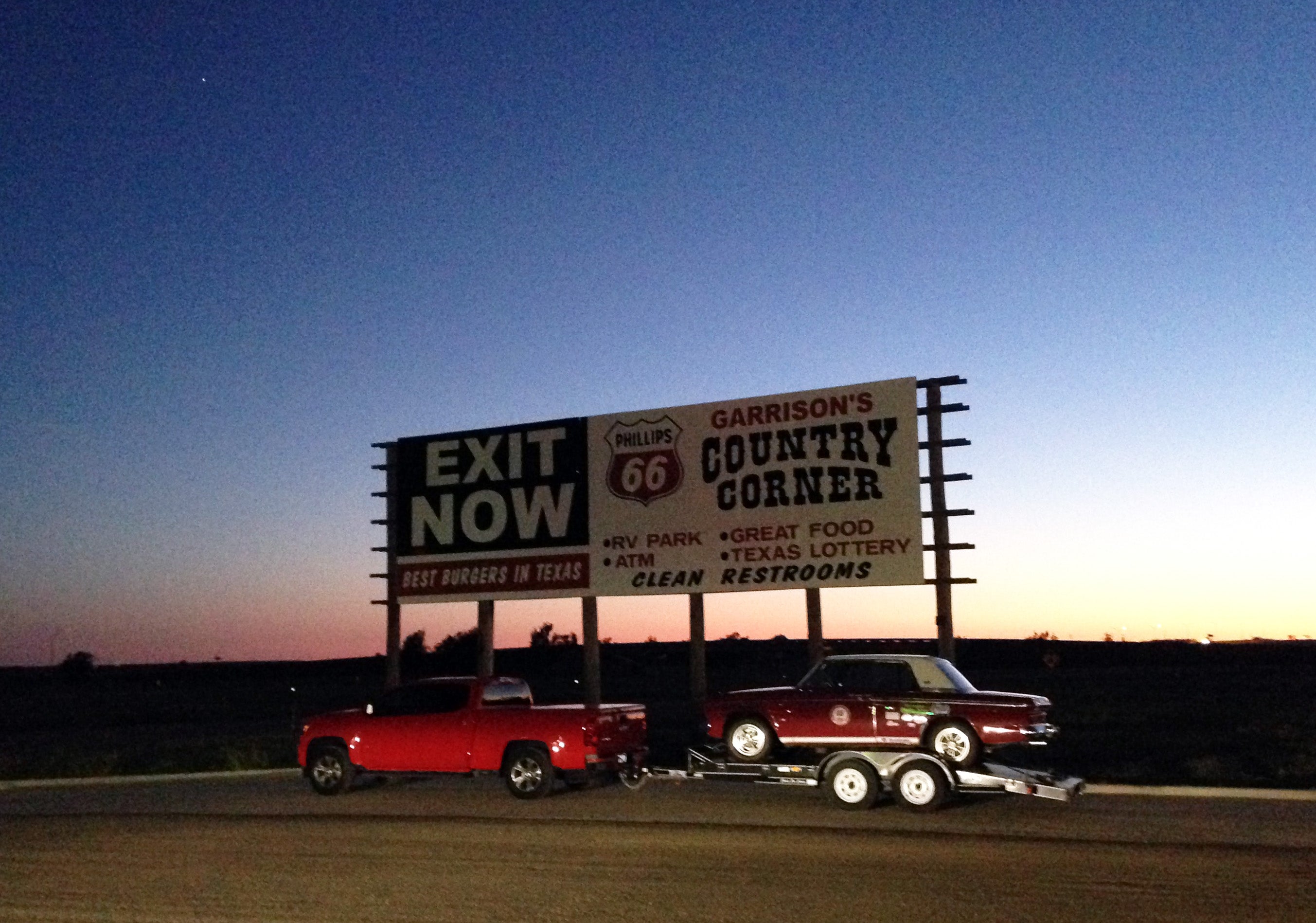 [PHOTO] The race ended early due to the weather. After the awards luncheon and saying our ‘see you soons’ (we never say goodbye) we loaded the wounded Daytona on the trailer and headed back out Interstate 40/Route 66 for home. We luckily dodged the weather, including snow on the ground in Texas! A quick meal then on to the next Holiday Inn Express. It’s so great to be able to use an I-phone to book reservations while we are driving.

Another thing that’s getting worse is a “˜tight spot’ in the steering on center. The Studebaker’s power steering system is kind of archaic, with lots of hoses running everywhere. The steering box seals need replacing also. Since it’s all been rebuilt I’m guessing it’s the control valve just set a little too tightly. Again, the internet helps with shared experiences.

[PHOTO] Stupid old car. After getting home safely and storing the trailer, the Daytona started leaking coolant out the right door while just sitting there. It still had the road grime from the rally on it! The heater valve sprung a leak, and it would have been hot water on the navigator’s leg if it had done it on the rally. Better now than on Great Race! That’s old cars for you: you never know what’s going to be next.

The engine and trans are working great, so after changing the oil all we need are new front tires, an alignment, the reconditioned third member, and we’re ready to go out to our practice area before loading the car on Reliable for the trip east. Let’s hope nothing else breaks!