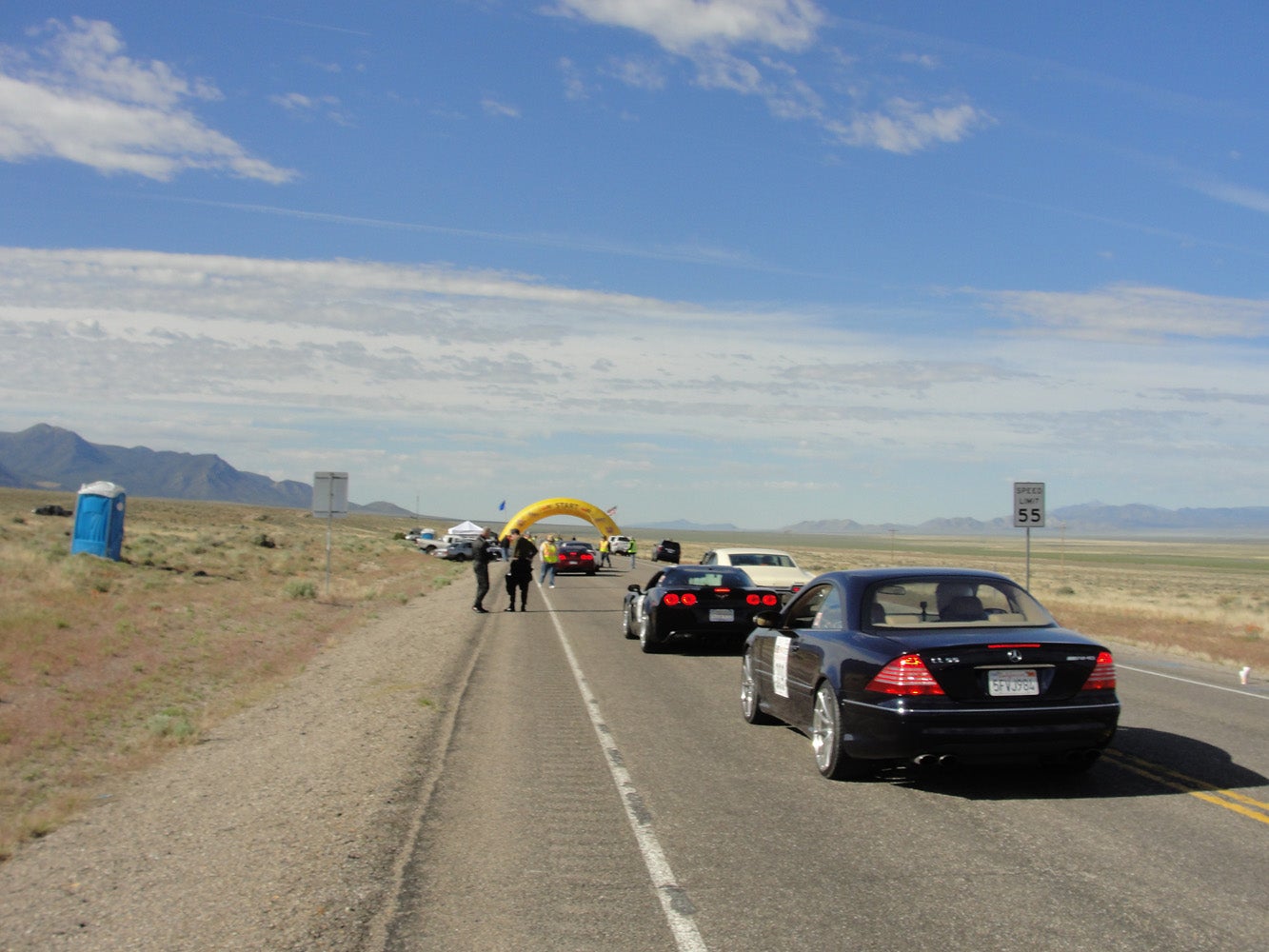 Click here to read part one of the series.

Nevada 318 closed to public access at 5 am on rally day. Nevada State Police and County Sheriffs from Nye, White Pine and Lincoln Counties provided security. Nevada State and County Departments of Transportation provided other support. Hundreds of volunteers helped. Someone was stationed at every gate and road entrance to the closed portion of 318 to keep wayward travelers off of the road during competition. The start and finish lines had many more volunteers to help the event run smoothly. The event’s executive director, Ms. Bunny Hill, estimated the total number of volunteers to make the event run well (and it does) at more than 300.

Communication on course was important. With no reliable cell phone coverage along the highway, NORC provided short-range hand-held radios to all course workers and to each competitor’s car. Volunteer ham radio operators strategically spaced along the rally route provided the necessary longer-range link to law enforcement, emergency personnel, and to the start and finish lines. In addition, three light aircraft went up and down the course during the competition to watch for any situation requiring assistance.

The rally started about 30 miles south of Ely at the south end of the town of Lund. A caravan of competitors left Ely at 6 am In Lund we were put in a pre-grid area. From there cars left the starting line at one-minute intervals beginning at 8 am. 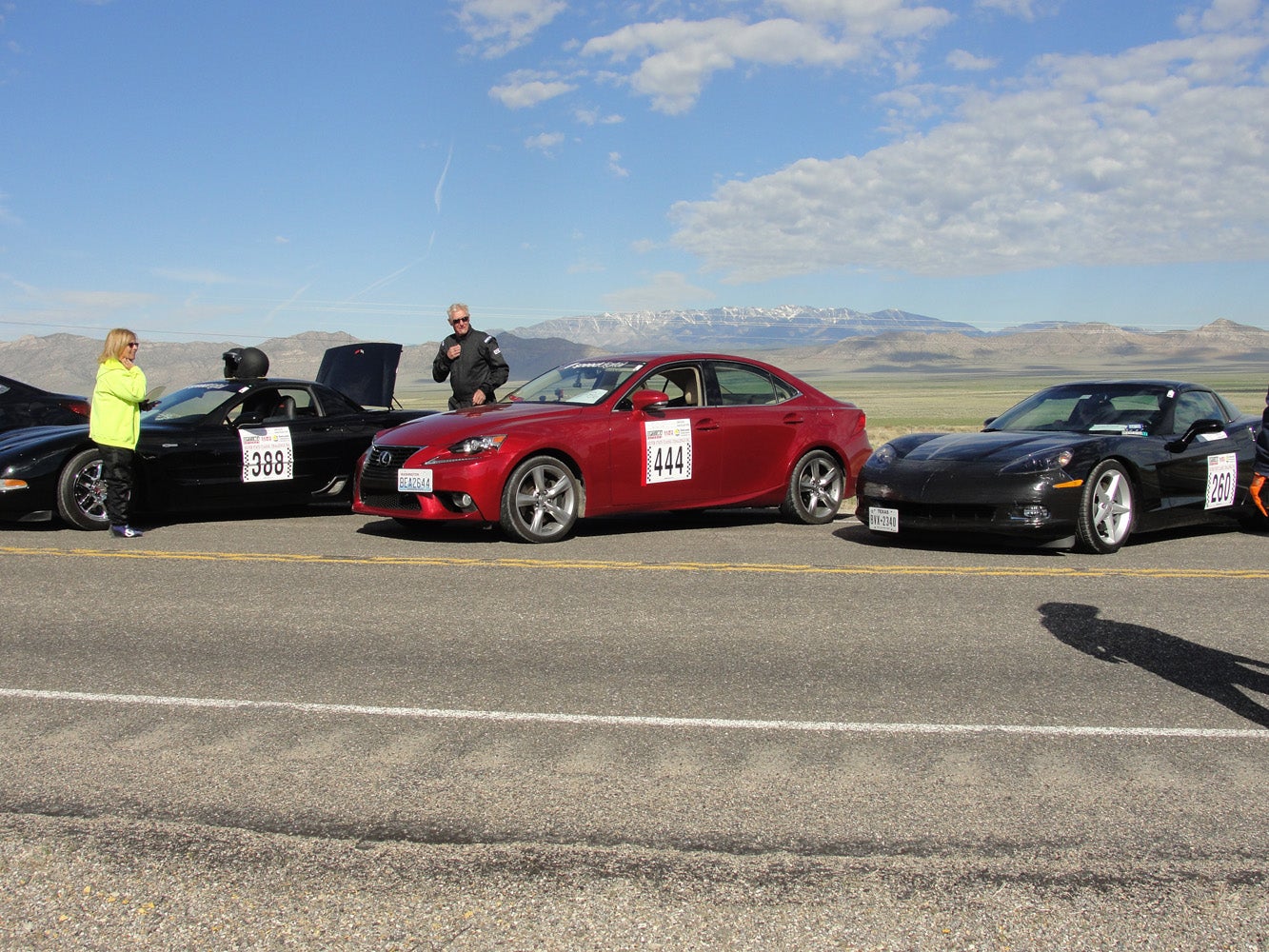 Volunteers performed safety checks as we approached the start: helmets and gloves on, appropriate clothing for your speed bracket, fire extinguisher at the ready, seat belts on, etc. Then a crew, on hands and knees, ran their gloved hands over the entire tread of each tire to make sure we had not picked any road debris that might puncture a tire. Tire failure is known as the most frequent cause for off-road excursions here””you don’t want that.

Official time was the most important part of the start. We practiced our technique: ignore the flag man and only go when we are ready, watch the official clock, at the appropriate time start both stopwatches (one smartphone plus an old-school wind-up as backup), start the GPS and the Lexus average speed calculators. Only then do we GO.

Megan and I were nervous but handled the start well. We immediately accelerated to about 110 mph to slowly bring the average speed up to our target of 100 mph. Within a few miles, we achieved that average and settled down to around 102 mph, allowing us to slow if necessary without dropping too far below our target average speed.

At checkpoints #3 (mile 30.11), #6 (mile 57.25), and the finish (mile 90), we were timed by NORC. Our in-car timing at #3 showed that we were on time. Between #3 and #6 there was a speed trap in which we were timed electronically over a short distance. That time was then converted to speed in miles per hour. We knew where the trap was located and sped up, knowing that we would have to slow down to get back to our average. We were timed through the speed trap at 124.4 mph, the fastest we have ever been in a car. Cool!

We then slowed to reduce our average speed. At checkpoint #6 we were on time. The Eagles “Highway to Hell” came on the XM radio. We smiled; how fitting.

Shortly thereafter we approached the only serious curves on the course, the White River Narrows. Here, the highway crosses from one valley to the next through a narrow canyon cut by the (dry) White River. To safely negotiate a series of 8 turns over about 2 miles, we slowed to 85 mph. As we exited the last turn, we accelerated to 110 mph to make up the lost time. Only seventeen miles of competition remain.

Megan, taking splits with the stopwatch and comparing to course notes: “We are”¦ slow”¦ We are 40 seconds slow!”

We sped up to 115 mph, knowing that we had only a few miles to get back on time.

A couple of miles later: “Megan, how are we doing?”

“We are perfect on time on that one!”

Megan clocked us crossing the finish line at 53:59.49″”almost perfect.

As we crossed the finish line, we felt elated, excited, ecstatic. We thought we were 0.51 seconds early after 90 miles and we were pretty impressed. What an adventure! We parked, took a selfie and waited for the other competitors to finish. 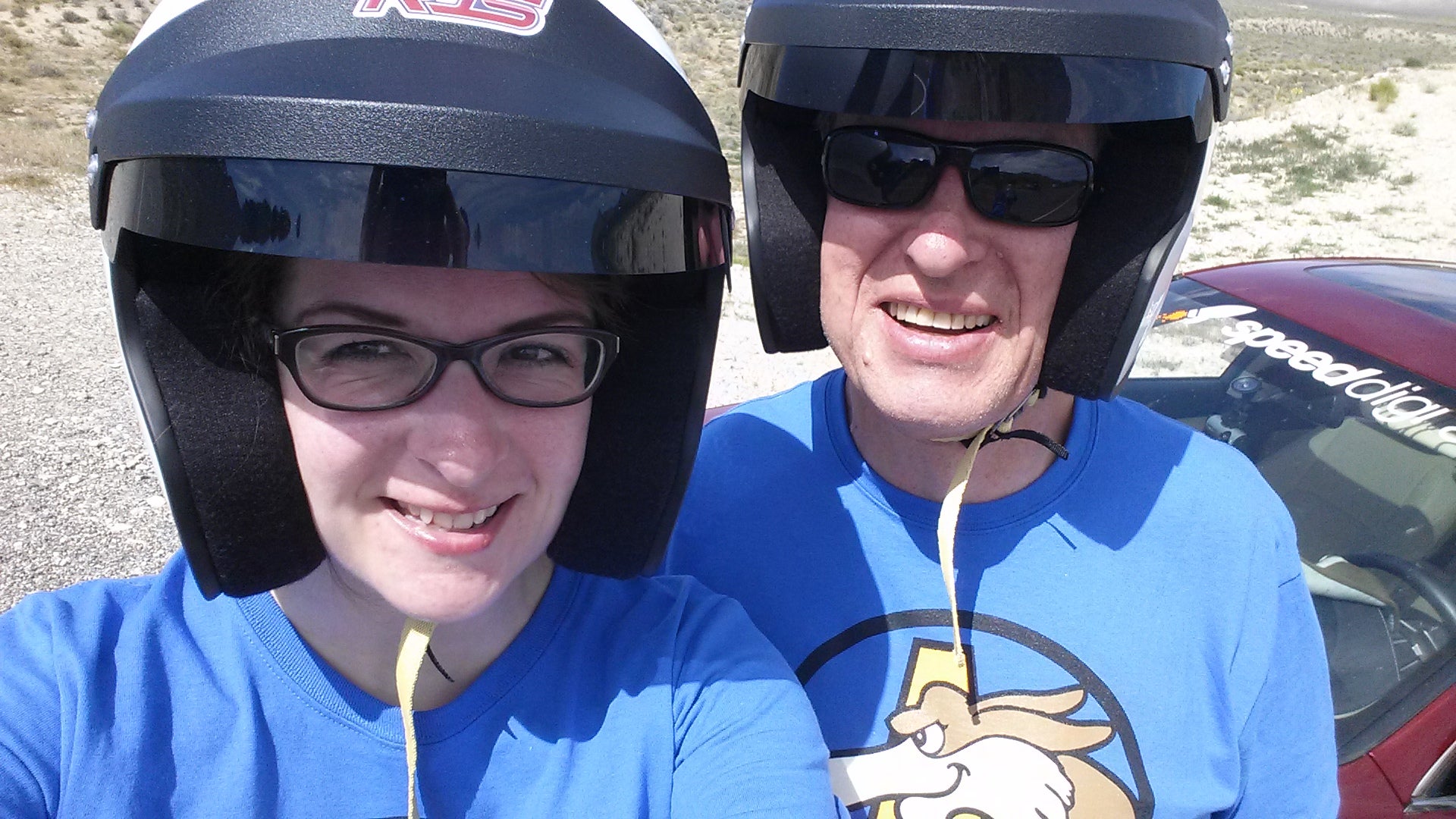 We were officially rookies no more and we all celebrated with Blue, the “King of Highway 318,” who led us in a pledge to return and race again, then showered us with silly string.

The last competitor on course was the fastest. Bob Allyn has been working on this car, a retired NASCAR racer, for years. He had driven it here before but never with so many hours of preparation, so much attention to detail, with such favorable weather, and””probably””a little luck. The temperature was in the mid 60s and there was very little wind to push the car around. Bob had picked the Unlimited class: no speed limit, no target time, all out for 90 miles. His car had 900 horsepower at 9,000 rpm or so, with ground effects skirts, wings, and window covers that contribute to his mechanical and driving prowess that results in a new Guinness World Records “Public Highway Land Speed Record.” Confirmation is pending, but his average speed will be above 219 mph; it took Bob and his navigator David Bauer just 24:35.00 to go 90 miles.

In a post-race interview, Bob reported 125 mph through the Narrows (Megan and I went through at 85 mph) and a top speed on his in-car GPS of over 240 mph. NORC clocked him through the speed trap at 243.3 mph. Bob credited David with outstanding support and attention to detail on course notes, and they both celebrated the victory. 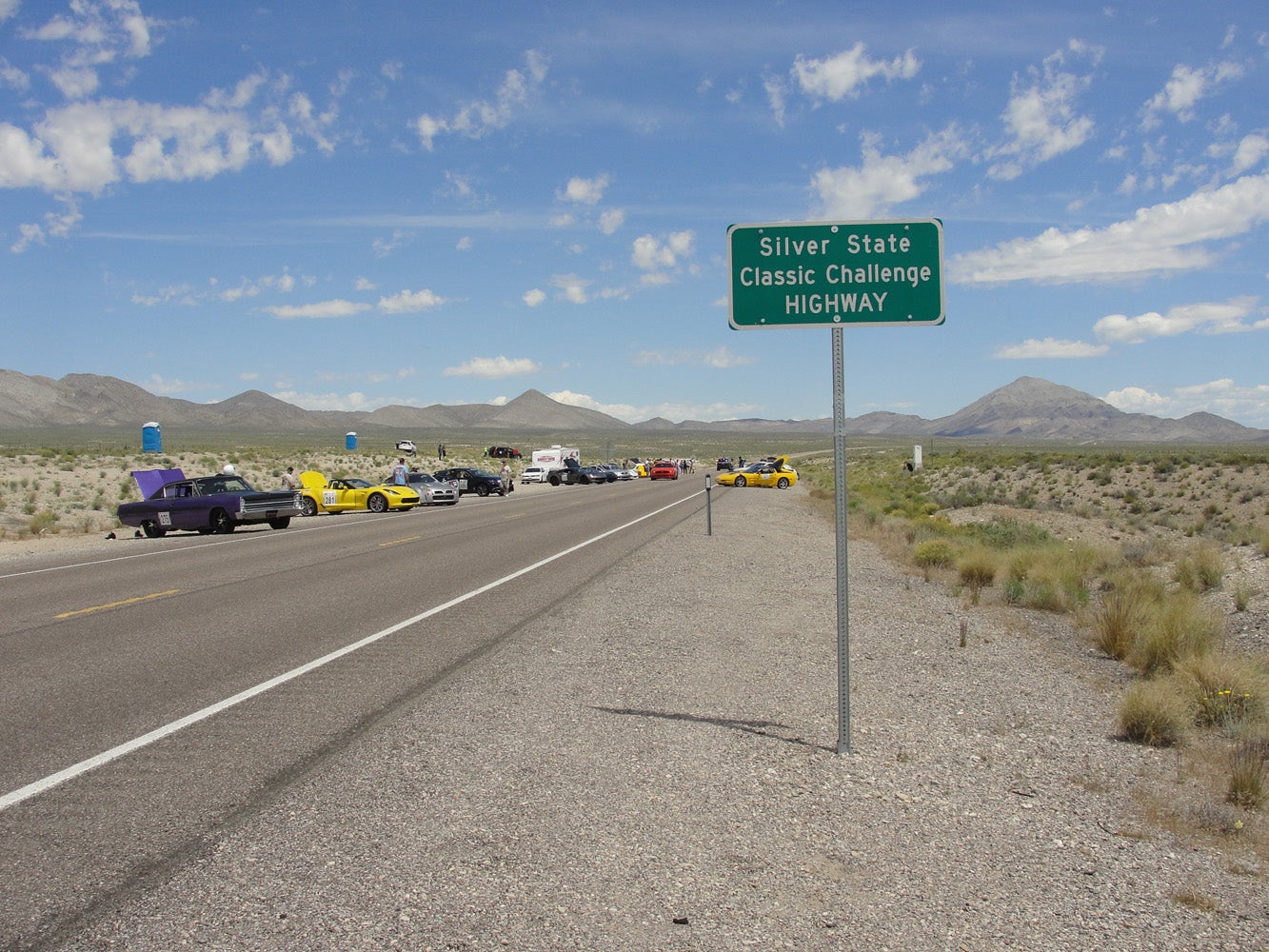 A no-host dinner was held at the Hotel Nevada in Ely for any competitors and course workers who did not go to big event in Las Vegas at the end of the rally. There were about 25 of us, all talking excitedly about our experiences. When Blue faxed the results from Las Vegas to the Hotel Nevada staff, I assumed emcee duties and announced the results. Dinner with a couple golden beverages and many golden memories followed.

We made new friends, celebrated, and all promised to do it again.

We finished first in our speed bracket, averaging 99.9995 mph. Our variance off of perfect time was just 0.0159 seconds, yet that was only 18th best among the 95 competitors. I told you this was a highly competitive event!

A modest trophy, a medallion and an awesome new car battery from Optima (a sponsor) are tangible rewards. For me, a closer relationship with Megan in our shared victory is the best. Bragging rights are good, too.

The closest to perfect time was Tom King. In the 155 mph class (new this year), he was 0.0003 seconds off. Tom has been doing this for a long time. Driving a variety of cars, this time in his Acura NSX, he has entered most of the classes and has won every one he entered.

After the rally on Sunday, it was a long drive home on Monday. Megan and I were up at 4 am Monday and hit the road. We stopped for coffee, gas and food a few times. We managed to cover 910 miles back to Steilacoom in 17:30 hours, averaging 52 mph””not exactly like yesterday””and getting 30 mpg on the drive home. Did you know that the speed limit on rural roads in Nevada is 75 mph, and on rural freeways in Idaho it is 80 mph? Fun! We listened to music, enjoyed a more leisurely pace and talked like we haven’t talked for a long time. It was the best part of the week. 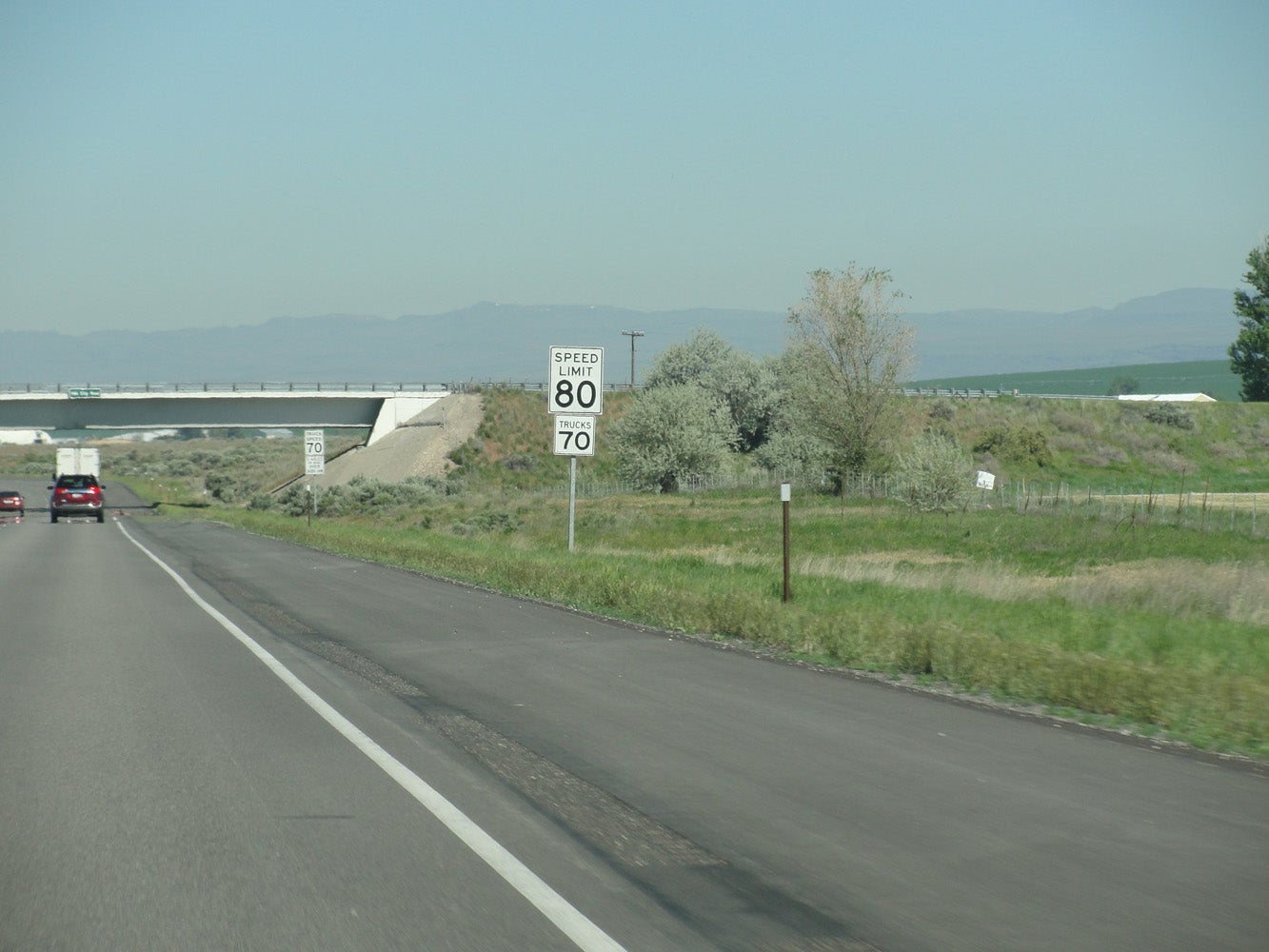 I am a lucky guy. I have many to thank for encouraging me on this adventure:

Megan, what are you doing next May?

Bill will be speaking about his time at the Nevada Open Road Challenge at the September If Cars Could Talk! Join us on Tuesday, September 5 at 11:30 am to hear his talk, which is complementary with Museum admission. Click here to learn more.